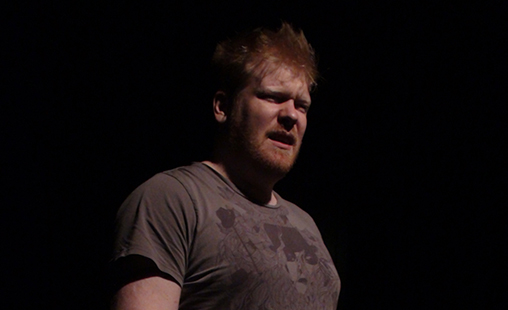 When Hugh first sent me the script for The War on Terry, and asked if I wanted to do it, I don’t mind admitting that I didn’t read the thing before I said yes. I was busy, and I trusted the standard of his work. I’d known Hugh and his writing for a couple of years, and had never seen anything of his that hadn’t filled me with a burning urge to be on a stage, saying the lines. Yes, I said, and didn’t think twice about it. Then I did read it, and it was 42 pages of size ten font. Cue many panicked exclamations of “Oh no…”, and “What have I done?”.

Luckily, that was the first draft of a few. We worked together on the redrafting process - by which I mean Hugh did all the work, for me to turn up and read it back to him while he fed me lunch. It was exciting; I’d never been a part of that end of things before, and I enjoy free lunches. What we were left with, a month or so later, felt like refined ore - triple distilled moonshine we’d brewed together in his living room. It was fascinating to see Hugh at work, mining and purifying the material as we went. And again, I really can’t stress this enough: free lunches.

So, two months ago, at the end of this process, when Hugh asked me to write a blog about my work so far, my response was probably blunter than he expected: “What work?”. I wasn’t intentionally being facetious. Rehearsals hadn’t started; my research hadn’t started; I hadn’t really done anything. Even when it came to feedback, I’d gushed more about Hugh’s wife’s cooking than I had provided useful criticism of the piece.

Or at least, that was part of why I didn’t want to write about my approaches and procedures. There’s always an anxiety about showing your working - or, in some instances, lack thereof. Actors and artists in general often suffer from impostor syndrome, however exceptionally talented they might be. Now, though, I have no excuse. The rehearsals happened, and we did the thing. And people liked it too, which was nice. ​ ​My first rule of acting is to never write anything down. I’m aware this sounds like a joke. A lot of actors and directors, if told this, will immediately start shouting angrily, but honestly, for me, notes are the enemy. To start with, I lose a lot of them, and then there’s the lamentable state of my illegible handwriting. Mostly, though, a note written down is an instruction, an unhelpful thing of certainty, separate from the melting pot of ideas and possibilities churning away in my head. Besides, eventually I’m going to have to remember it all anyway, so why fuck about.

By the weekend, I’ve given myself a headache trying to remember five rehearsal’s worth of comments and observations without aid. 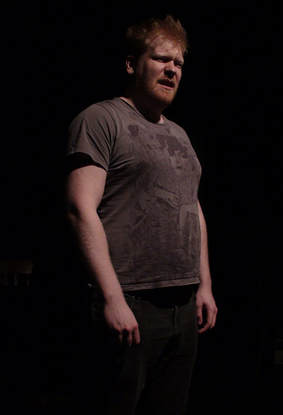 Steve Conlin in The War On Terry by Hugh Dichmont, Nottingham Playhouse, October 2017

At this point, it’s time to lock myself in a room and cut the chaff. Preferably jittery on caffeine and sugar, I’ll thrash out what works and what doesn’t, what fits and what doesn’t, what’s inspired, and what definitely fucking isn’t. ​This will exhaust and frustrate in equal measure. “Just use it in your character study”, someone will say, with a presumably unintentionally smug grin. In this moment, these people are the worst people to ever walk the planet, partly because they’re probably right - it’s an hour-long monologue, after all.

But seriously, this flailing self-flagellating is what’s required - for me, at least. It’s an insane thing to try to accomplish: the difficult, intricate process of extracting a living character from a text, and the actually impossible task of layering this character on top of a blank canvas. It’s never a truly blank canvas. Great chameleons like Hugo Weaving get awfully close, but it’s an infuriating pursuit that almost always ends in tears. Inevitably, I end up learning something about myself, usually when trying to identify where my personality has snuck its way into Terry’s. But enough about my vibrant, irrepressible character.

Hugh was great. I’ve only rarely had the pleasure of the writer’s presence in the rehearsal room, and it usually proves to be a terrible idea. Not so with Hugh - always willing to be convinced by a change, always encouraging me to explore, never once precious about any line, any word. If anything, Hugh was gently daring me throughout the rehearsal period to find a better way of phrasing the entire play. I couldn’t, and most of my suggestions were dumb, but it was very generous of him to let me repeatedly melt off my wings.

Other people helped too. Not enough for me to bother mentioning (Gareth, Matt, Dom - thanks guys).

In the end, however, it’s just me on the stage, facing a small sea of enthralled, slightly slack-jawed resting faces - the rocks upon which Terry repeatedly throws himself. Mostly Terry, sometimes me, if I’m fucking up a line. The lights, the heat, the adrenaline, the judgement - a merciless arena of public humiliation in which to test how well I’ve done my job. And they liked it, so well done me.

Now all that’s left is to write a fucking blog about it.